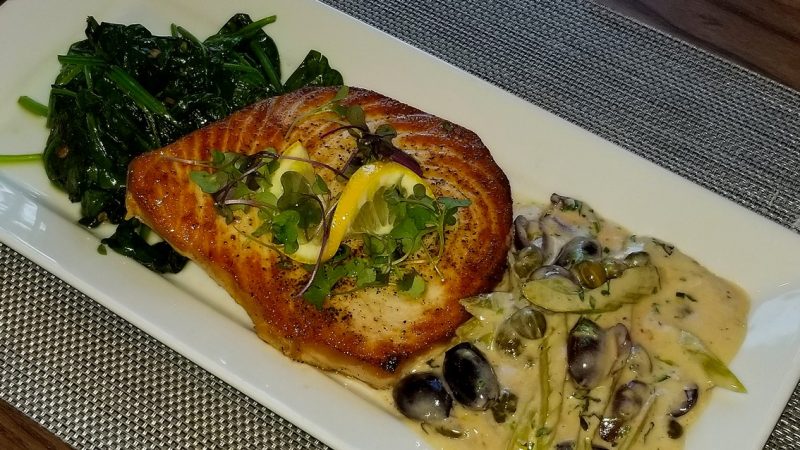 Café Aura—Connecticut Needs Its Heroes Now More Than Ever

It’s always a sad day when a venerated restaurant closes, as Cavey’s in Manchester did in May, 2019. For several decades, Cavey’s was among Greater Hartford’s most beloved. The dual restaurant concept that Beard-nominated executive chef-owner Steve Cavagnaro and his wife Kate maintained for many years of its existence, with the upstairs dedicated to Italian dining and the downstairs to French, meant that Cavey’s was simultaneously one of Connecticut’s most important Italian and most important French restaurants. I respected both efforts so greatly that I separately visited the Italian upstairs for the February, 2011 edition of Hartford Magazine and the French downstairs for March, giving both stellar reviews. 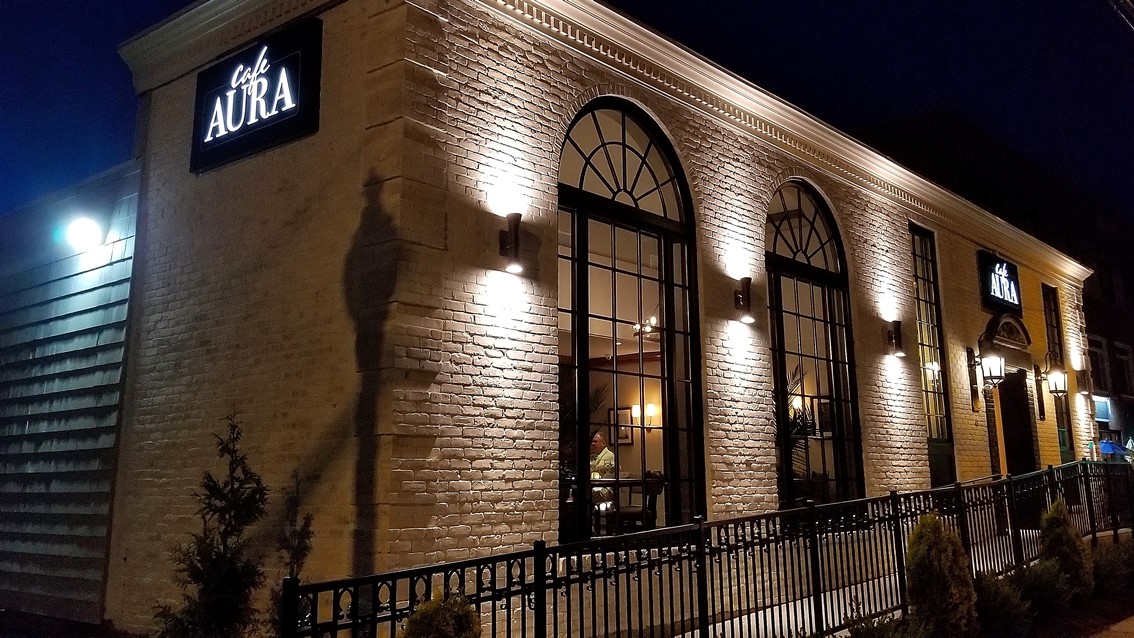 Speaking frankly—as I find impossible to avoid—the audience for high-end restaurants east of the Connecticut River, although growing, has never been what it is for restaurants west of it. And despite a few nice dining options, Manchester isn’t Glastonbury, let alone West Hartford. So the looming closure of Cavey’s, esteemed enough to draw gourmands from across Connecticut and even beyond, was potentially a terrible one, both for the community and the restaurant’s loyal and well-trained staff. 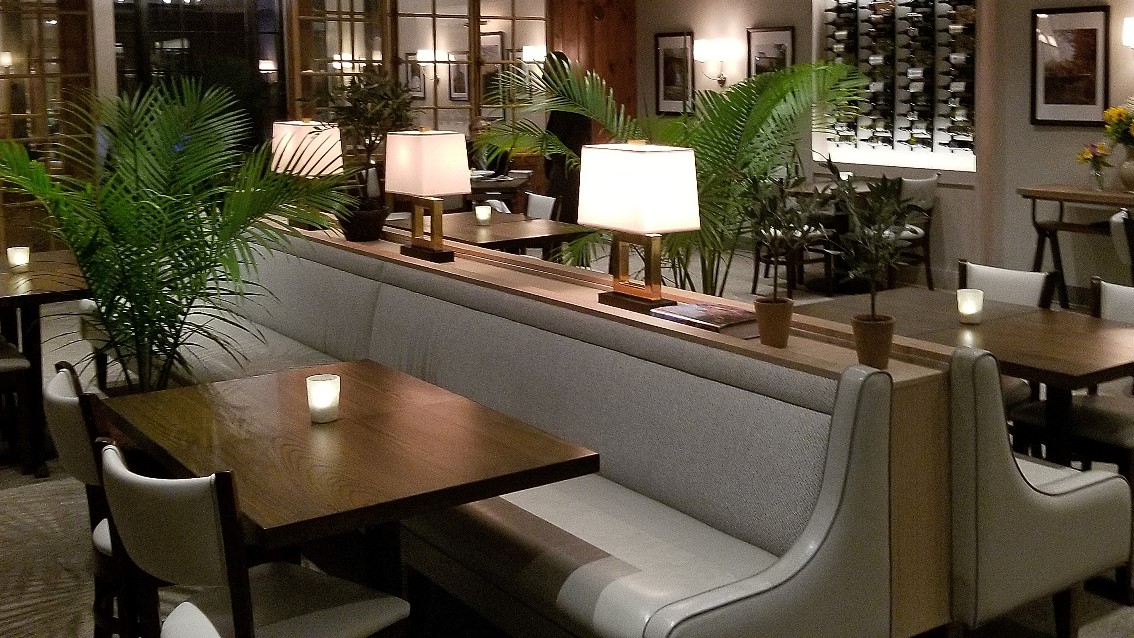 But there’s a hero to this story—one who might already be Connecticut’s top hero. The restaurant’s savior was UConn women’s basketball coach and restaurateur Geno Auriemma, a Manchester resident and Cavey’s regular who gathered the Cavagnaros were nearing retirement and had no family interested in continuing the operation. Recognizing the importance of maintaining a highly esteemed eatery in the location, Auriemma reached out to the Cavagnaros, closing on the building in June of 2019 and commencing a $700,000 renovation in early July. Thus was Café Aura born in December of 2019. 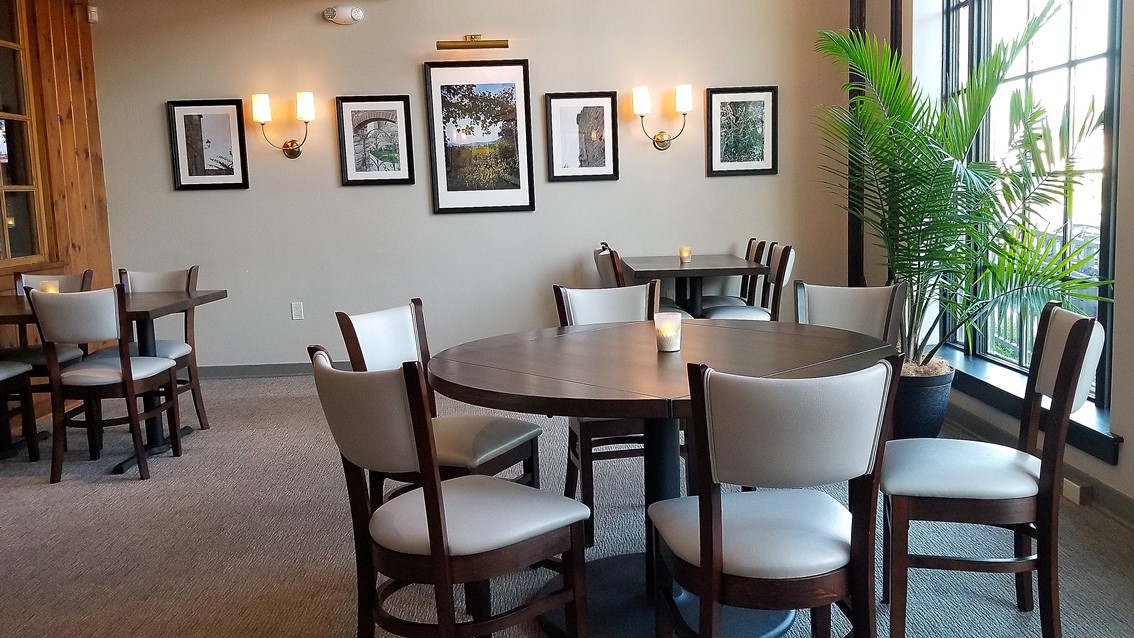 If Cavey’s felt as if it existed in a slight time warp, Café Aura—dedicated to “world-class wines, prime steaks and classic Italian dishes with a modern twist”—is a restaurant for the times. Exterior lamps mounted between the restaurant’s high, arching, street-facing windows throw light up and down the white brick exterior, creating, if you will, their own auras. A lamppost casts a long shadow against the building, reminding me of the long shadow Auriemma casts over our state. “Someone to watch over—us” runs through my head. The pandemic and civil rights protests have made some folks angrier versions of themselves, others, like myself, more empathetic and sentimental. 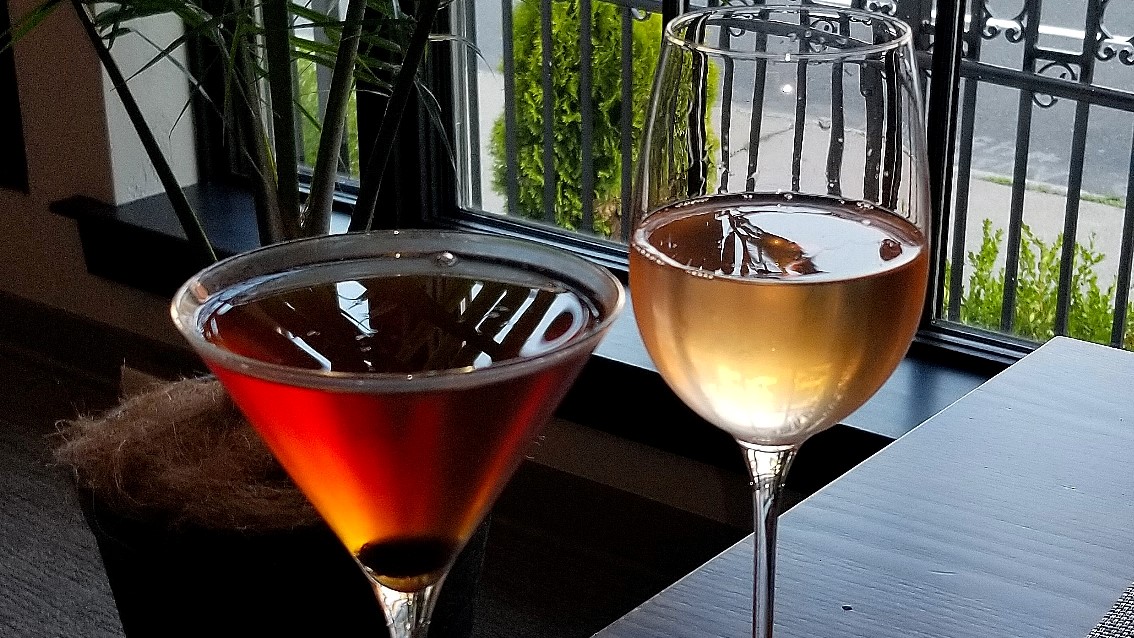 Gray carpeting helps muffle sound in the dining areas, but the large, open lounge features a pretty vinyl-plank floor. After all, what restaurateur wants a quiet bar area? The long quartz bar with footrail, properly socially distanced, awaits the return of more convivial times. Available for private functions, with pre-pandemic seating for roughly 75 individuals, the downstairs has kept its basic outlines, including the bar in front and slightly raised platform in back, but otherwise echoes the upstairs décor. 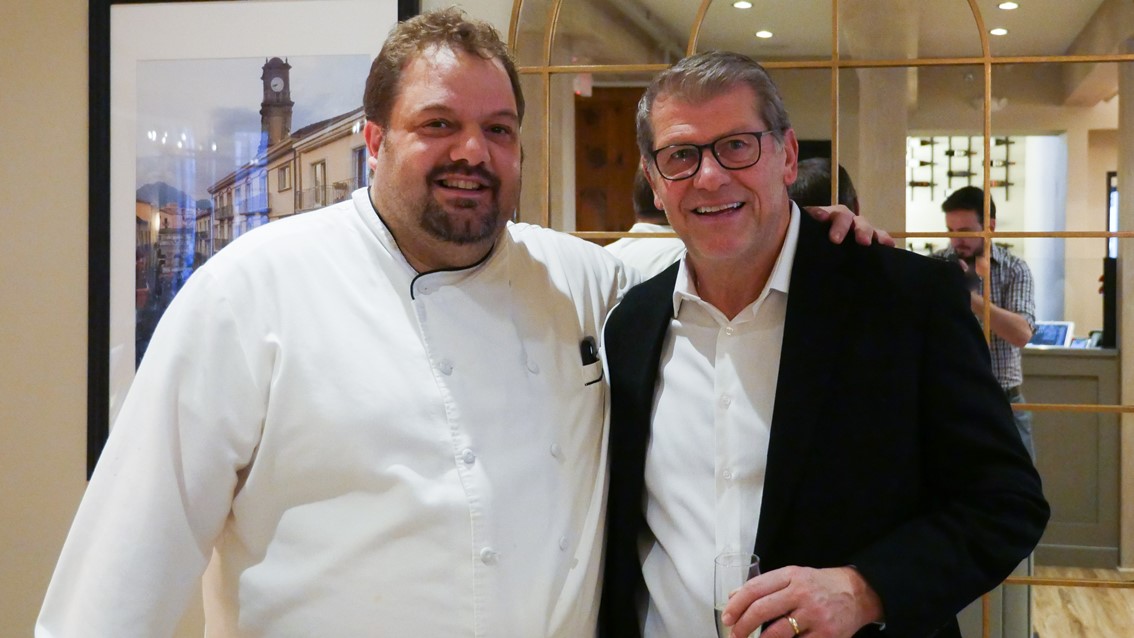 Café Aura has a terrific drinks program. Cocktails ($12-$14) include items like a fig mule ($12), lavender lemon drop ($12), gin blossom ($12) and even rosemary gimlet ($12), but Manhattans are my poison of choice. The Aura Manhattan ($12) I have on my first visit is terrific, featuring Michter’s Rye, Blade & Bow Bourbon, Carpano Antica vermouth, orange bitters and a proper Luxardo cherry. (An American-style maraschino cherry can’t harm a Manhattan—if you remove it—but it can’t help it, either.) On my second visit, I force myself to order something else, albeit with a highly compatible flavor profile—the 45 East Center Old Fashioned ($14), described as “barrel-aged premium bourbon, orange and cherry essence, aromatic bitters, aged for two months”—and it also proves very good. 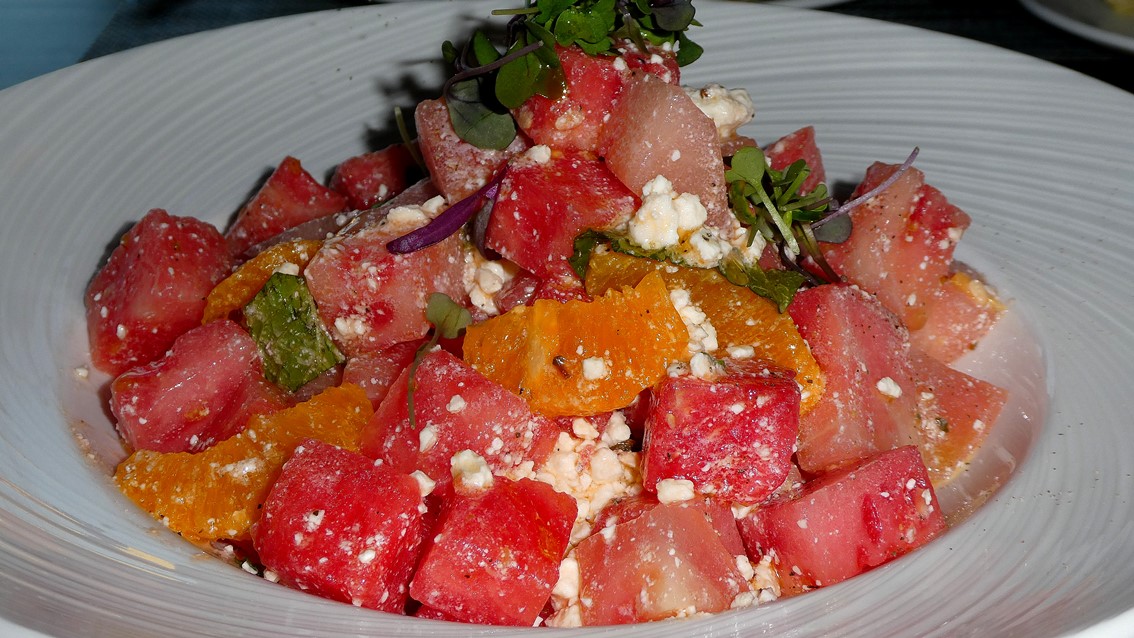 But where Café Aura particularly distinguishes itself is in its wine list ($34-$495), food of this quality demanding suitable accompaniment. Because my companion requires white wine or Rosé and I trend red, we’re rarely candidates for whole bottles. Café Aura conveniently offers its regular wines by the glass in six- ($8-$15) and nine-ounce ($12-$22) pours (plus six-ounce luxury Coravin pours, like its Jordan Cab for $25). On our first visit, my companion enjoys a glass of Baron de Ley Tempranillo-Garnacha Rosé, Rioja, Spain ($9/$13), while I follow up my Manhattan with a glass of Vietti “Tre Vigne” Barbera d’Asti, Piemonte, Italy ($12/$18). On our second visit, my companion delights in a glass of St. Supery Sauvignon Blanc, Napa, California ($12/$18), while I, normally distrustful of private labels but having great faith in this particular restaurateur’s palate, try the Geno Auriemma Puglia Rosso ($9/$13), finding the Primitivo robust and juicy in a good, pound-your-fist-on-the-table-and-ask-for-more kind of way. 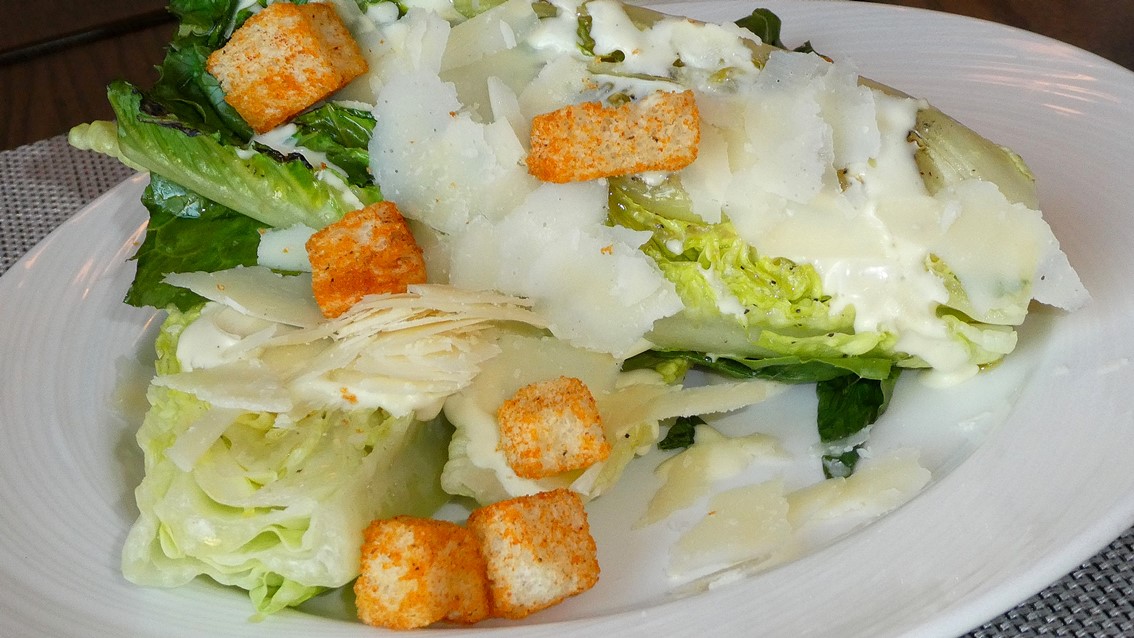 But it’s worth noting for oenophiles (I’m certainly one) that great offerings can be found on the Coach’s List, of which Auriemma says “Kathy and I enjoy entertaining friends at home… I want all our guests at Café Aura to have the opportunity to experience these wines.” The regions of Burgundy, Napa, Piedmont and Tuscany are especially well represented. While some of the choices, like the Jordan, Dominus, Quintessa, Ornellaia and Tignanello, are obvious, there are also revealing, lovely surprises like the 2016 Ghost Block Estate Cab, Oakville, California ($125) or the 2013 Feudi di San Gregorio Taurasi from Auriemma’s native Campania. 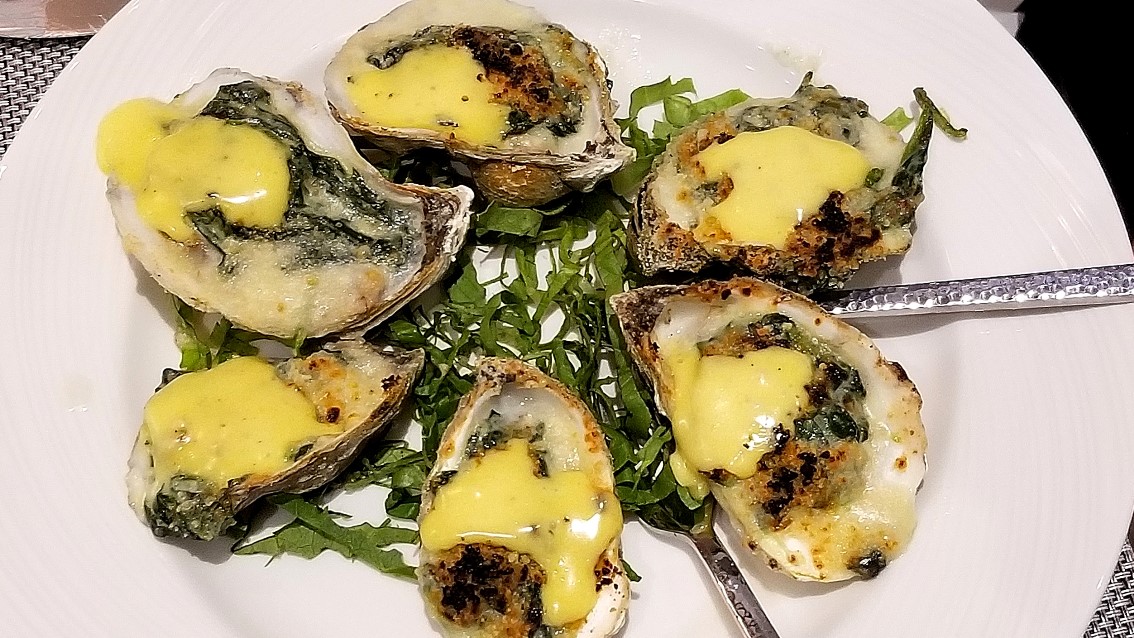 Italy, with more microclimates and more white varietals than any other country, really rewards the adventurous. I love Auriemma’s passion for oft-overlooked southern Italian wines. Tremendous bang-for-the-buck can be found in Italy’s southerly regions where land is more affordable, the cost of land being the principal predicter of the cost of wine. Although delicious food and wine can be found throughout all of lo Stivale (“The Boot”), I find it ironic that Connecticut residents seem to prefer the foods of southern Italy but the wines of northern Italy. While I’m not overly didactic about pairings, believing people should drink what they want when they want, I do maintain that the wines of a region evolve alongside its cuisine, making them an ideal match. 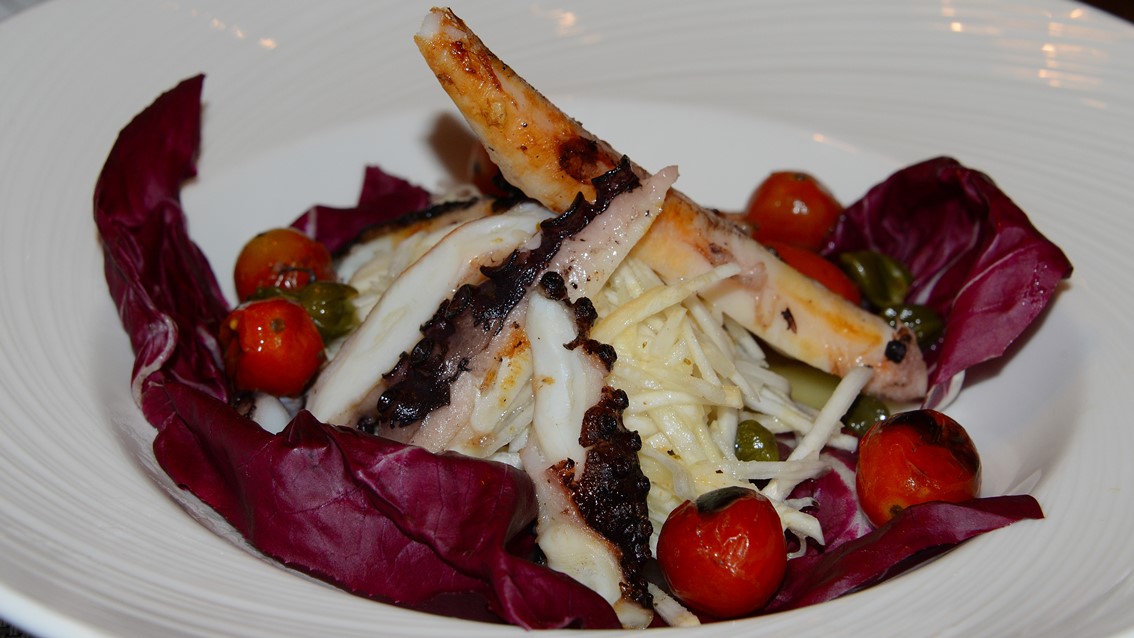 For the May 2014 edition of Hartford Magazine, I reviewed Geno’s Grille, Auriemma’s Storrs restaurant (which will not reopen) and really enjoyed it. But as good as it was, Café Aura is a notch more ambitious and better. Conte brings great breadth of experience to the executive chef position. He has worked “all over Europe,” including fun stints in Saint-Tropez, on private lines and on yachts. Since his arrival in the U.S., he has served as the executive chef of top Italian restaurants in New York like Barolo, Acquapazza, Cellini and Fiorini. “The more I know, the less I know,” he intones sagely. “The day you stop learning, you retire.” 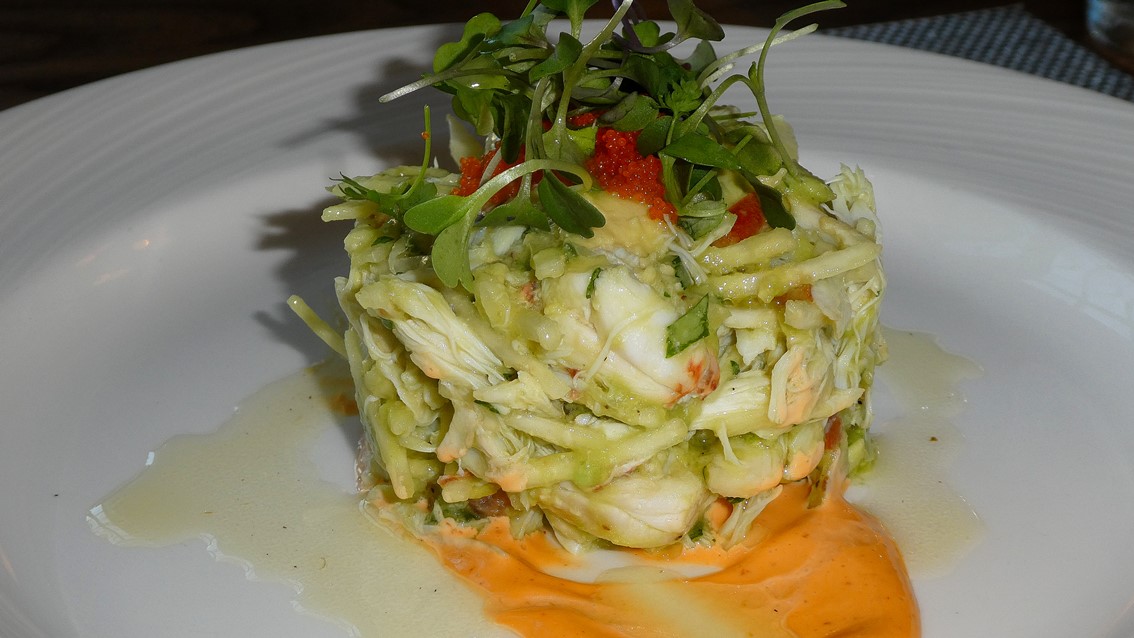 None of Café Aura’s salads are designed as entrées, but some can be pretty substantial nevertheless. The refreshing watermelon salad ($14) features plentiful bright pink cubes of fresh seedless watermelon, a few orange wedges, smidgens of goat cheese and fresh mint in a lemon vinaigrette that perfectly reins in the melon’s natural sweetness.

Grilled Caesar salad has been a “thing” for a few years—in the right hands, a good thing. There’s an amusing video, easily found online, of Gordon Ramsey in a Kitchen Nightmares episode feigning ignorance of grilled Caesar salad, saying it “hasn’t hit London yet” and interrupting diners to mock the restaurant for offering it. However, he was probably being disingenuous because he reportedly had one on the menu at the time at his New York restaurant, Maze.

What’s gratifying is Café Aura offers its Caesar ($12) either grilled or traditional. My companion exercises the grilled option, which includes crisp elongated hearts of romaine, a robust Caesar dressing, seasoned croutons and nice shavings of Parmigiano-Reggiano, finding the lightly charred flavor a welcome change of pace. If you elect the traditional version instead, I recommend requesting it prepared like the grilled with its romaine heart unbroken and Parmesan shaved. 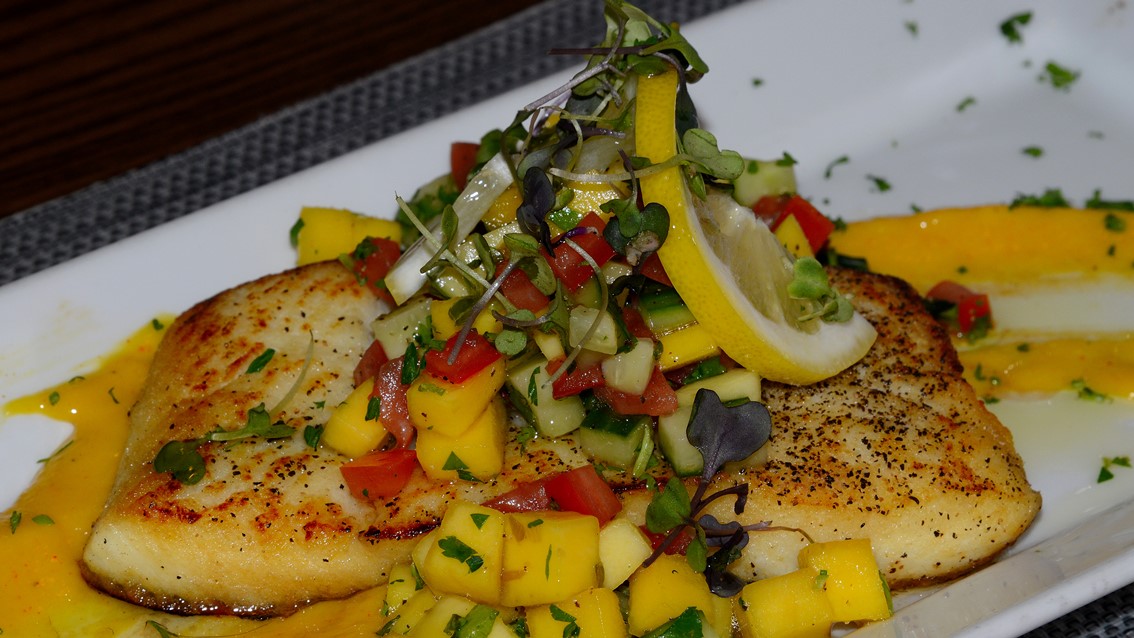 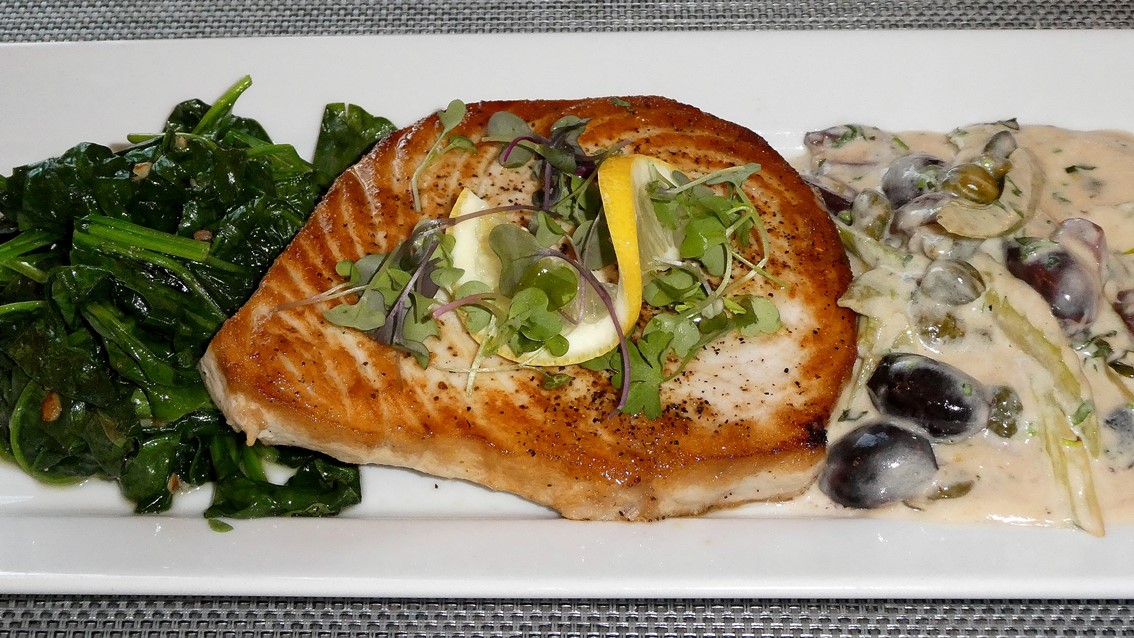 Placed atop a comet tail spoon drag of spicy mayo, the delicious crab avocado mousse ($18) is a timbale formed of jumbo lump crab meat, avocado and celery root topped with tobiko and microgreens. The dish is delicate and well-balanced. Arguably even better, three colossal pan-seared dry scallops ($16) are served over a smear of multi-color pepper coulis. The scallops are perfectly bronzed, their flesh naturally sweet. I’m always astonished, watching Ramsey’s Hell’s Kitchen in seasons past, how terrible the scallops look and how poorly they hold a sear, causing me to theorize that West Coast scallops can’t hold a stove flame to East Coast scallops. But aren’t we in the era where seafood can be flown in overnight from just about anywhere? 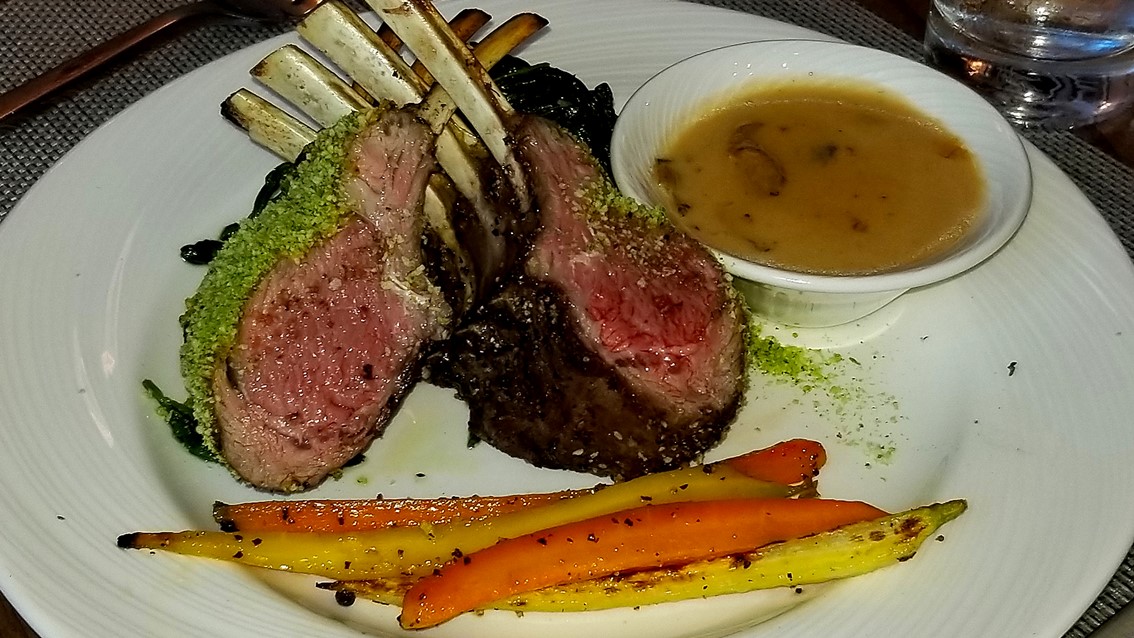 As good as our starters have been, Café Aura’s entrées seem to take things to an even higher level. A beautiful square of pan-seared halibut ($39) lounges on a bed of lovely mango sauce, the fish topped with a mango-summer salsa that’s a fine dice of fresh mango, cucumber, tomato and cilantro. The swordfish ($38) is swoon-worthy, its grain shaped like the eye of a hurricane, its lovely burnish like the teak deck of a yacht. Served with sautéed garlic spinach, the fish steak comes with a “white livornese” sauce that’s a reduction of cream and vinegar with julienne celery, black olives and capers. It’s not hyperbole to say this swordfish preparation deserves to be included with great fish pairings like trout amandine, mustard-glazed salmon, skate beurre noir and cod in pil pil sauce. 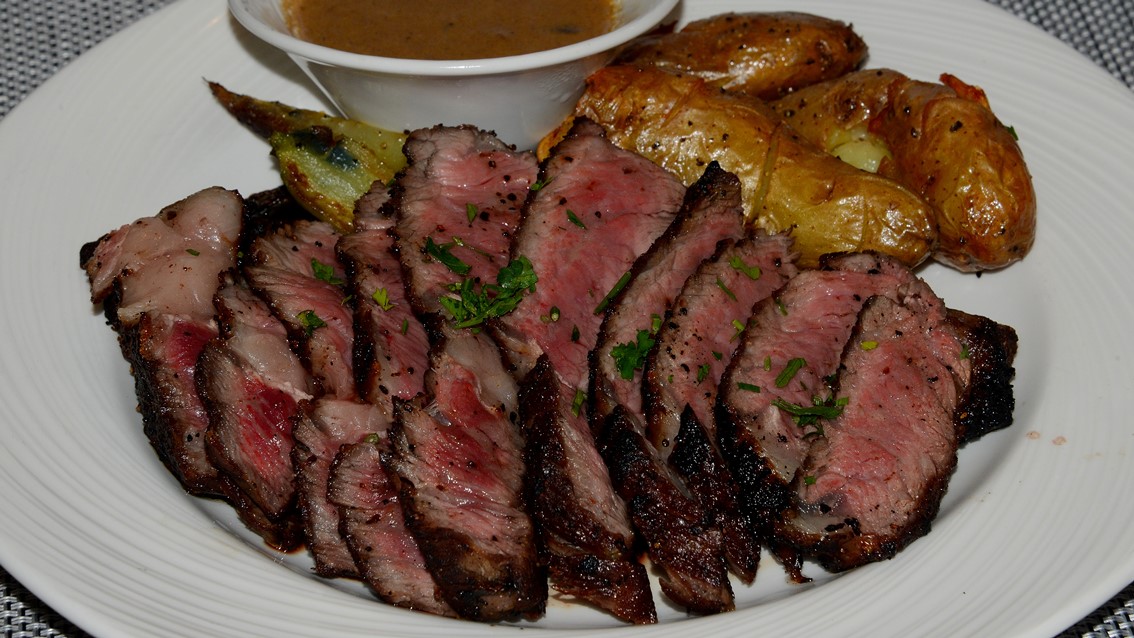 The perfectly seasoned and cooked 16-ounce, prime Black Angus rib-eye steak is served sliced in an impressive array, its rectangular pieces revealing the wonderful crisp edging, delicious marbled fat and glowing pink interior of superior meat. The rib-eye is accompanied by roasted fingerling potatoes, baby rainbow carrots and a delicious porcini mushroom sauce that I apply only to the potatoes because the meat is too good to tamper with. 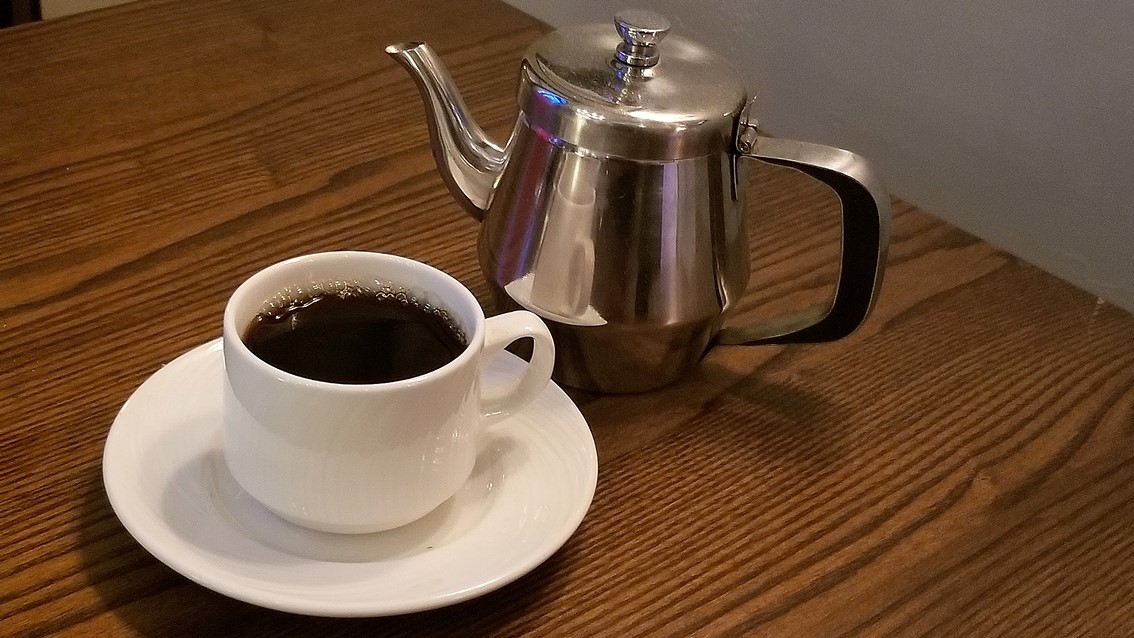 The dessert list ($8-$12) may be short, but it contains great housemade options. My companion delights in her scoops of chocolate, vanilla and espresso crunch gelato. And I love Café Aura’s refreshing key lime pie ($10), which has lovely flavor without being unpleasantly tart, as some can be. But the best dessert, a customer favorite, may be a slice of the moist, nutty, creamy pistachio cake ($12). Conte explains, in a follow-up interview, that it’s really two cakes in one, featuring two moist sponge cake layers sandwiching a pistachio cheesecake layer, the cake covered with an almond-pistachio fondant and strewn with pistachio pieces. If you try nothing else, try that one! We wash our desserts down with good strong Lavazza black coffee ($3) served from individual coffeepots, enabling free topping off. 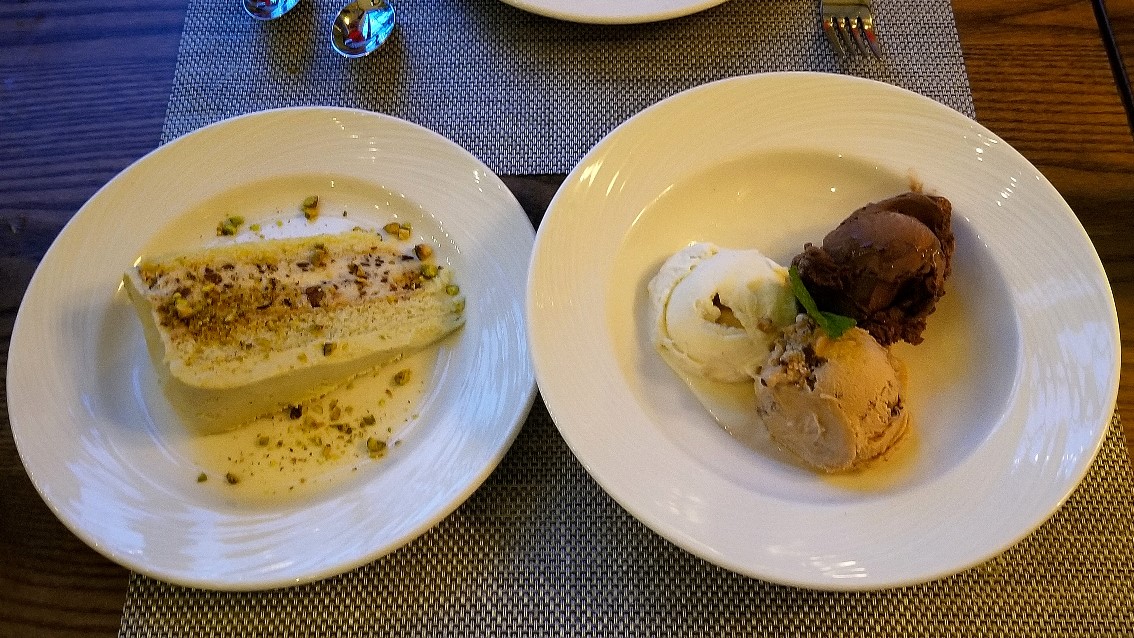 During our first visit, we’re seated in the attractive small dining room in the front of the restaurant, during our second, in the small rear dining room where the old Cavey’s sign, previously mounted on the front of the building, is displayed in nostalgic tribute. Not surprising considering Auriemma’s high standards and the retention of so many Cavey’s staff, our service proves both welcoming and attentive.

On our second visit, a genial Auriemma makes an appearance and, letting customers know he’s just been tested, stops by tables to check that they’re happy. Unsurprising to anyone who knows him, he’s as hands-on a restaurateur as he is a coach. But he also is fortunate to have a highly capable director of operations in son-in-law, Todd Stigliano. 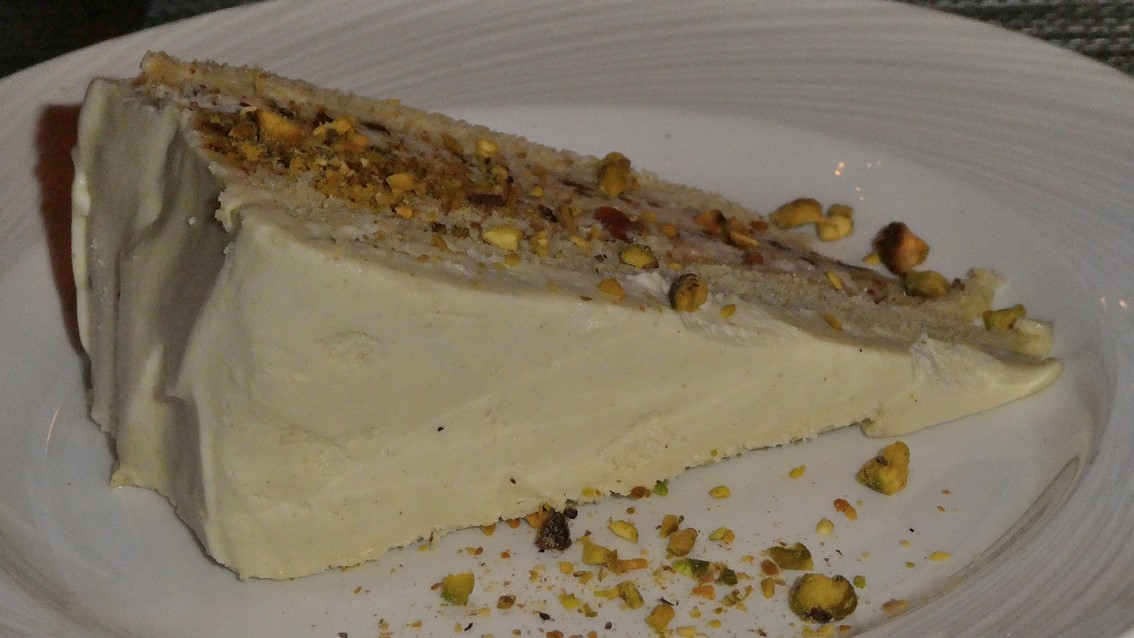 Looking forward to autumn, Conte plans to introduce lots of new menu items, some of which he says depend on delivery returning to normal. He hopes to bring in truffles, to braise meats, and to offer temptations like wild game and fettuccine with chocolate.

Given its inviting atmosphere, attentive service, inventive Italian food, terrific beverage program and committed ownership, Café Aura has much to recommend it. I’m not sure whether to call it good karma or a great aura, but whatever it is this restaurant has it in spatulas. 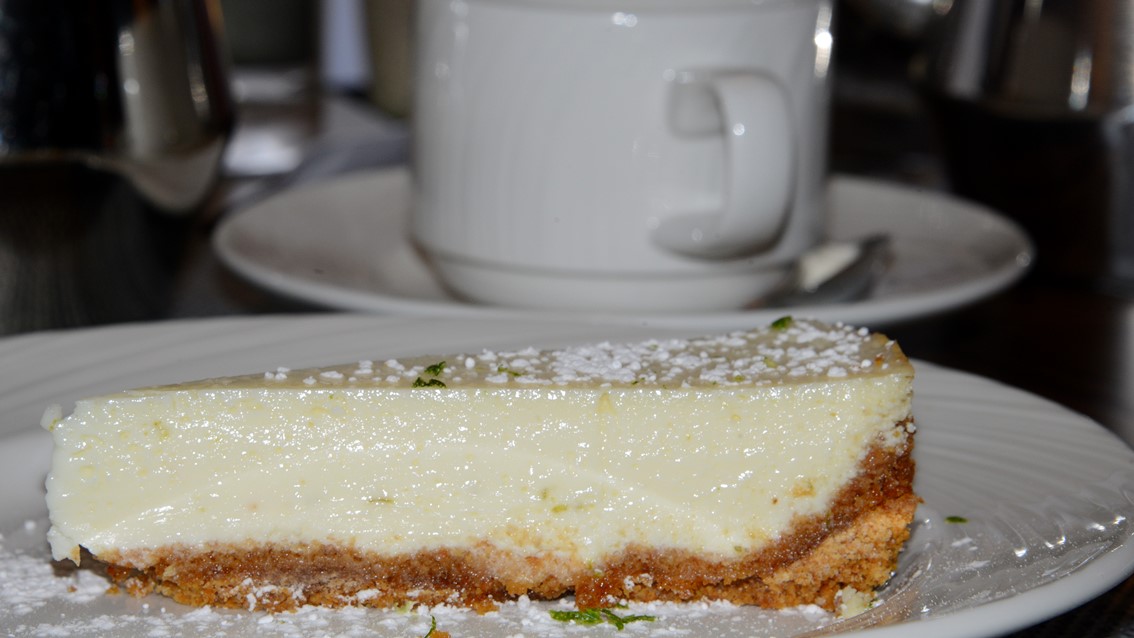 Geno Auriemma expounds on his background, the restaurant business, his love of food and passion for wine, and of course, basketball.