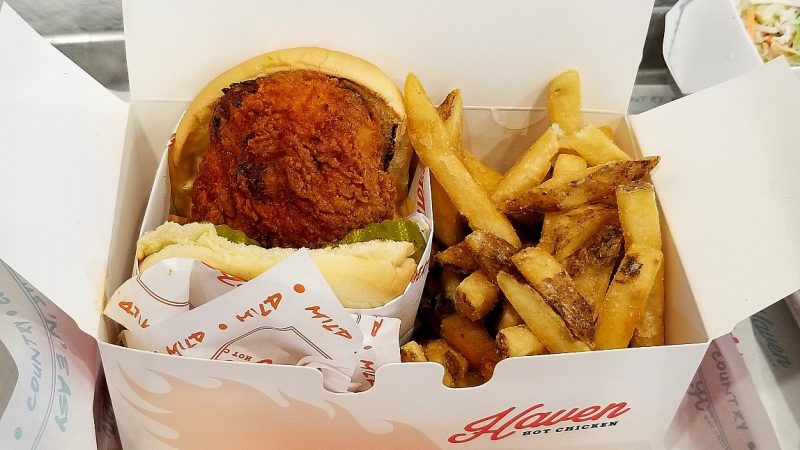 Saturday, October 17, was the public opening of Haven Hot Chicken in downtown New Haven—and there was a line down the block. Earlier in the week, my wife Ann and I were the first to attend the press opening of this exciting new Nashville hot chicken restaurant created by a team of industry veterans well known to followers of the Elm City food scene.

As we parked across the street in a total downpour, we were heartened to see Jason Sobocinski waving to us in greeting. An innovator with a Midas touch, Sobocinski has been involved in Caseus, Ordinary and The Stack in New Haven and Black Hog Brewing in Oxford—just to name a few career highlights. Joining him in this venture are chef Rob LaTronica of Wheelers in Woodbridge and the Beer Collective in New Haven’s Ninth Square, Craig Sklar owner of the Beer Collective, and Etkin Tekin, founder of the Little Salad Shop in downtown New Haven. All four gentlemen were on hand to explain the genesis of Haven Hot Chicken.

A restaurant for the times, the bright and cheerful joint is focused on takeout and delivery, offering no indoor seating. Setting the tone inside is a mural by well-known area artist M.J. DeAngelo, who signs his works @refractualism. The helpful mural depicts a white chicken emitting flames from its mouth depicting the varying grades of hotness available. The spice levels include Country (which I’ll characterize as not spicy), Mild (spicy enough for many), Medium (packs a pleasing wallop), Hot (just as it says) and Haven (wear gloves). There are even a couple of higher spice levels (have your doctor on hand) available off-menu for serious masochists. 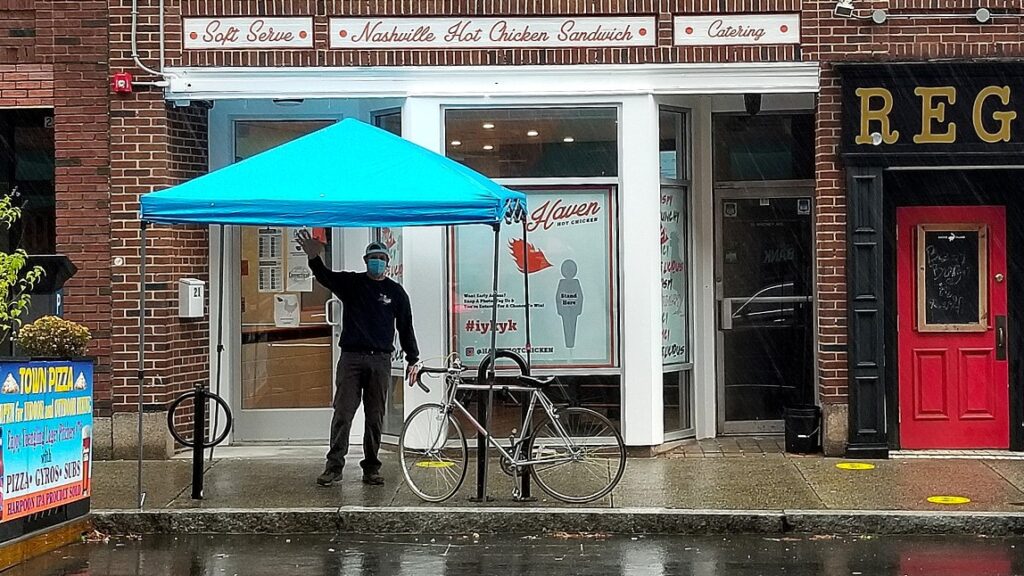 The genesis of the concept was the ownership quartet’s passion for Nashville hot chicken. Haven Hot Chicken is billed as Connecticut’s first eatery dedicated to the incendiary fried chicken from Nashville whose popularity its music industry and visiting tourists are helping spread. Hot chicken has its roots in Nashville’s African-American community, with Thornton Prince III, owner of a chicken shack, credited as its originator. According to legend, Prince was a womanizer who, after a late night out, incurred the wrath of his girlfriend, who prepared him a fried chicken breakfast with a vengeful dose of pepper. Prince reportedly liked the chicken so much that, by the mid-1930s, he and his brothers had devised their own recipe for it.

Besides THE Sandwich, there’s a Tendie Trio that includes “three buttermilk-marinated jumbo tendies, garlic-dill pickles, served on white bread with a choice of sauce.” The sauces available are blue cheese, Haven ranch or the proprietary Rob sauce. There’s also a cauliflower Not Chicken version that was an instant hit with our resident vegetarian daughter. 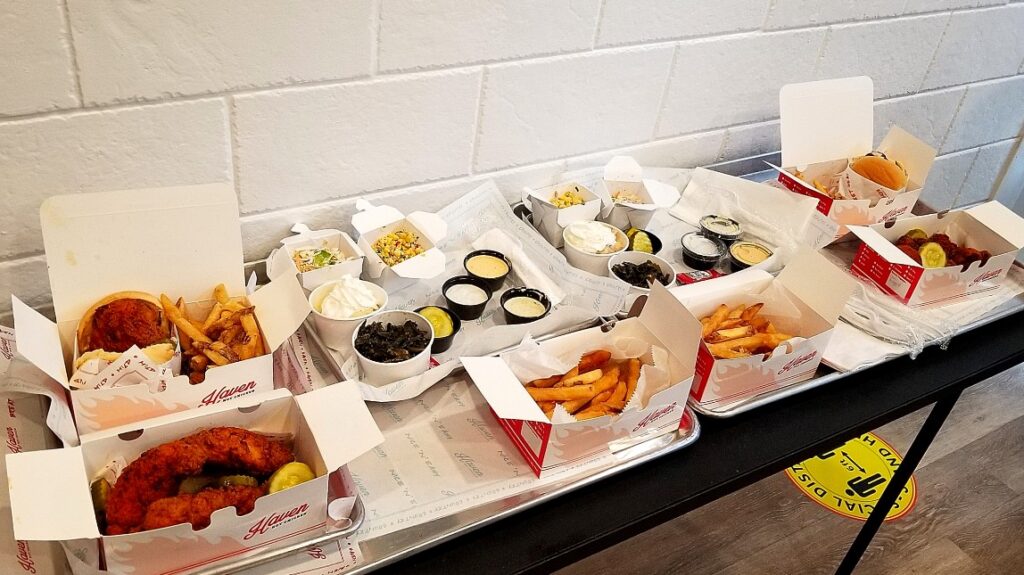 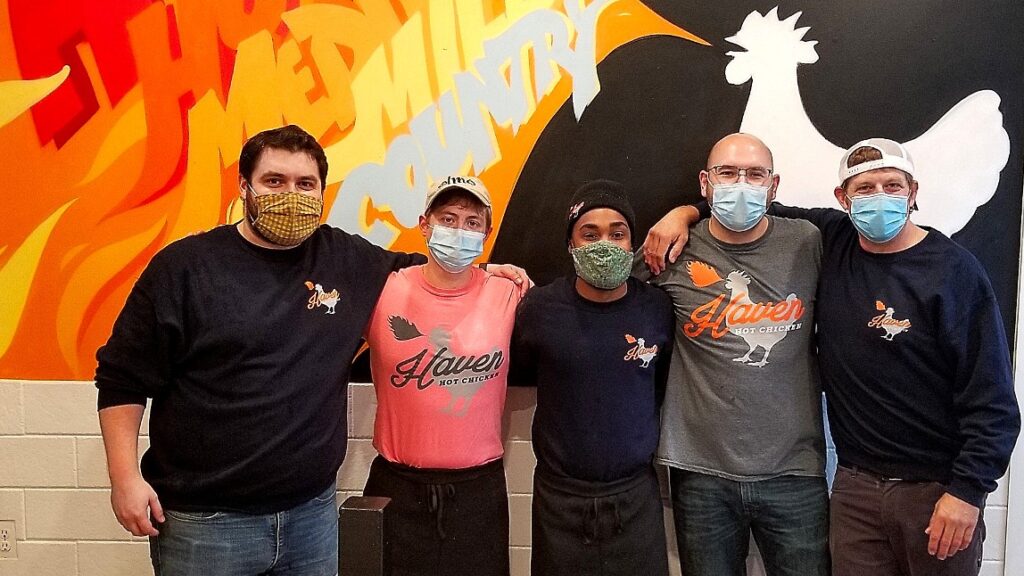 Haven Hot Chicken’s sides can be a lot of fun as well. There are braised skin-on French fries, collard greens, creamy vinegar slaw and garlic-dill pickles. But my favorite side is the esquites, the off-the-cob variant of the Mexican, grilled corn, street food favorite known as elote.

And finally, I found the banana pudding absolutely charming. Made with vanilla rum pudding, sliced banana, Nilla wafers and fresh whipped cream, it activated pleasure centers in my brain forgotten since childhood.

Beyond loving the food, I’m tickled by the Tendie Roulette challenge, where you get one chicken or Not Chicken jumbo tendie of each of the five spice levels. If you’re someone who rubs your eyes in disbelief or when they tear up, this would be the wrong time. 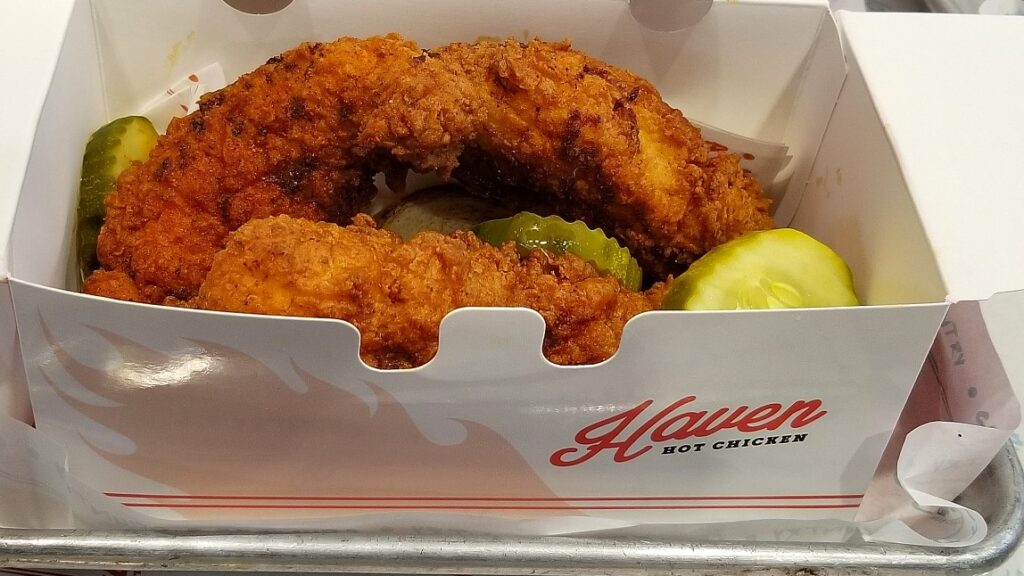 Having once helped open a chain of Empanada Joe’s restaurants in New York City, I couldn’t help noting that the Haven Hot Chicken concept has been carefully branded and has obvious expansion potential. Strong believers in giving back, the owners of Haven Hot Chicken have started One Percent for the People, through which they will donate 1% of the restaurant’s proceeds to Connecticut-based organizations, selected on a monthly basis, that “focus on equality for all people.”

Because hot fish is a variation on hot chicken, I reached out to Sobocinski and asked if they had plans to introduce it in the future. His response: “We tested hot cod. [It] was sooooo good! 100% [we] will  be doing it in the future.” I am so jazzed to try it when it becomes available.

PrevPreviousRSVP Only If You’re a Mensch